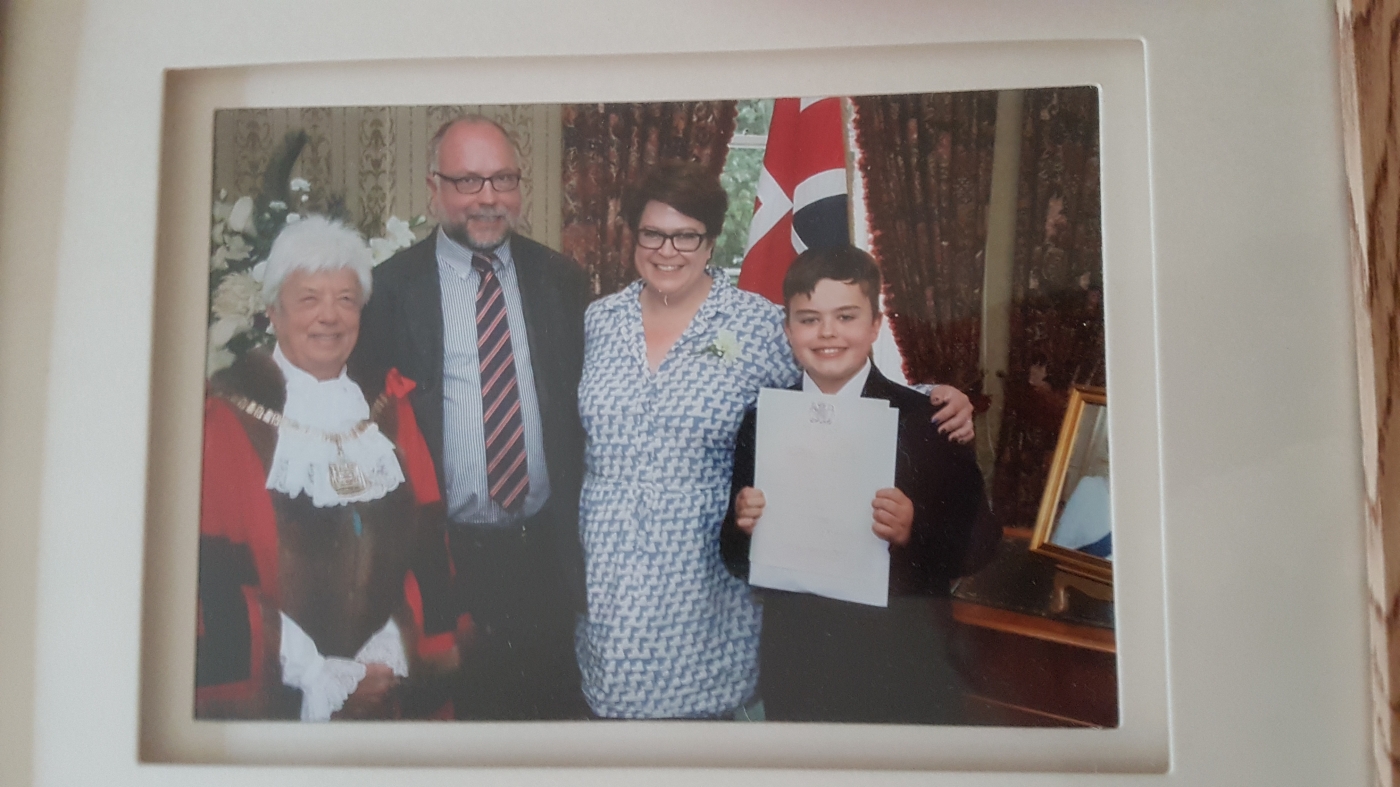 A few years ago I sat in the back of a Black Cab in London. The driver was listening to a talk radio station. I was on my phone (I hate talking in cars – trust me, I am not being rude, it makes me a little nauseous).

At a stop light the driver held up a copy of the Daily Mail with a headline that matched what the bozos on talk radio were wittering on about. (For those of you in the US – The Daily Mail is basically Fox News for the UK, in paper and online form).

“Look at this,” he said pointing to the front page. “All these babies being born to mothers from overseas. They’re going to bankrupt the NHS. There won’t be any of us left in London anymore.”

I looked at his face, open and relaxed. He had glanced at my reflection in the mirror, hell he had seen me when he picked me up. I looked safe. I looked professional. I looked like ‘one of us’.

I looked at him in the mirror. “Yes, my son was born to a mother who was born overseas.” And I went back to checking emails on my phone (Oh, I should just admit it, it was Twitter). The driver turned to look at me again, clocked my accent (which comes and goes, I do admit) and stuttered. “Oh, I wasn’t talking about people like you, love.”

My good friend Andra Sonea wrote about her own Personal Story of Immigration yesterday for a project called My Shitty First Draft. It told the story of her education at the London School of Economics. Of traveling to the UK from her native Romania. Of holding the hand of her five year old son as she was told that her application to stay in the UK had been denied, and oh, by the way, all her personal documents she had submitted in order to obtain that visa had been lost. It brought up a lot of emotions in me.

I too have an ‘immigration story’, but is is much harder to tell, because it was a vastly smoother path. My story is one of privilege. Acknowledging and pinpointing all the ways your life has been shaped by that privilege is a lot harder to admit.

Because the thing of it is, that Daily Mail mail article, the idiots on talk radio, the Black Cab driver were all right and I was wrong. They weren’t talking about ‘people like me.’ Most of my ancestors came from Western Europe. I was born blonde and blue-eyed. I don’t walk down the street to Friday prayers and my Easter always falls on the day that the signs in all the supermarkets say it should.

It is hard to write about the other side of Andra’s story. For everyone that is excluded, there is one who is accepted. For those who have barriers thrown up in their paths, there are those who never break a sweat. That equal and opposite social construct fuck up that we are all trying to get our heads around now.

I know I can walk into an administrative office, apply for a job, wait in a coffee shop for a friend, get pulled over by the police for failing to put my lights on in the dark (true story) ….and I will be ‘believed.’

I grew up in the United States, in New England, in a small, safe suburban corner north of Boston. Growing up I never questioned whether I would go to university or pursue my dream of working as a journalist in New York. Disappointment for me would have been having to attend UMASS (the University of Massachusetts with half my high school). I look back at that wish, that spoiled, pampered wish of a cosseted teenager, and cringe. UMASS would have much easier for my parents, financially. I didn’t grow up wealthy. But my family worked very hard to make sure my brother and I wanted for almost nothing.

I ended up at a private university in New York and graduated four years later with a BA in Communications and Political Science with no student debt. Three people – my father, my mother and my aunt – worked six jobs so that I left school with a degree and nothing else. I will never take that advantage for granted ever in my life. But this blog isn’t about my childhood, it’s about my travels.

I did become a journalist in New York. Three years later, I was asked if I wanted to work in the London office. I was 25, it was the 90s, I thought it would be fun. I would go, for a year. The London Bureau chief managed to secure me a work visa, claiming how my superior skills were needed in London. (Real reason: I was convenient and cheap) Two years later I married my English husband in a ceremony in the USA and applied for a spousal visa.

I was the only white person in the queue at the Home Office in Croydon. My interviewer glanced at my file – which had mine and my husband’s birth certificates, wedding license, my passport – she slapped a ‘Wife – Single Entry’ salmon coloured stamp on my passport and handed my file back to me and said: “In a year, come back and we’ll give you ‘Indefinite leave’ NEXT!”

I told this story at a business lunch, during that short period between ‘single entry’ and ‘indefinite leave’. I made a small remark, ‘what if I am denied?’, with a wink. My lunch companion looked at me. “I doubt it,” he said. “You are a nice, middle class girl.”

At the time I smiled at him. But now I look back with older eyes. What if my skin had been darker? If my voice betrayed a thick Eastern European accent? Would I still be a ‘nice, middle class girl’? Would I still be ‘one of them’? The question is ridiculous. I grew up in a western democracy. I spoke english in a way everyone understood. I put up a tree and stockings at Christmas. Black cabs always stopped for me in the queue at Charing Cross station.

A year later I was granted indefinite leave to remain the United Kingdom of Great Britain and Northern Ireland. The sponsor of my residency status now moved from my employer to my husband.

Years went by, several cats came and went, we had a few house moves, and a baby boy arrived. My husband and I promptly took him down to the US Embassy where he was granted a certificate that says he is ‘an American from birth.’ My son holds two passports – the UK and the USA. I used to tell people how jealous I was that half the world was opened up to my baby son. “He’ll be able to live and work anywhere he likes – from Poland to Alaska!” I would say. Brexit put a dent in those dreams. But then life is never a clear and easy path – even if it looks like that for some of us.

A few years ago, frustrated at not being able to vote, and I decided to apply for UK citizenship. I took the ‘test’ – at a Learn Direct office above a kebab shop in Lewisham. (Bonus question: When did farmers first come to Britain? A: 1,000 years ago B: 2,000 years ago C: 3,000 years ago or D: 4,000 years ago 😐 ) A few weeks later I got the letter saying my application was successful. I was about to become a citizen of a country I had lived in for almost 20 years.

The ceremony was held at Sidcup Registry office with about 15 other people. I giggled a bit when we sang ‘God Save the Queen’ (My father was a history teacher). The administrator called out our home countries before we went to the front of the room to receive our documentation.

“Originally from THE United States of America!”

We all went up, one by one for our photos. Afterwards my little family went out for a Chinese meal in Bexley. (I had a few friends who suggested we should have had fish and chips).

My path across the Pond was easy, straightforward, directed by my desires – not dictated by circumstance, or economics, conflict or even bureaucracy. No one lost my files. No one questioned my applications. No one put a barrier in my path. My immigration story is not about an ‘exceptional girl’. It’s about an ordinary one. A story that many more people, no matter where their journeys began, should be able to tell also.

My name is Liz.

I am a mother who was born overseas.

And I am an immigrant.