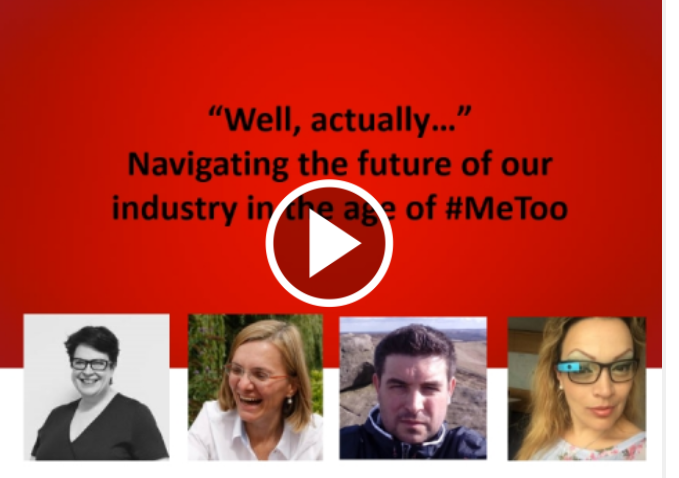 A few weeks ago the Financial Times exposed the story regarding the treatment of women at a charitable fundraiser held at the tony Dorchester Hotel in London. The women at the party told tales of being groped, plied with alcohol and being propositioned for sex. Having spent over 20 years working in banking and technology, and having been to my fair share of parties where men outnumber women (by a wide margin) nothing that was exposed at that party particularly surprised me.

I’ve been to an aftershow party, sponsored by a large financial technology firm, where men were grabbing women out of their chairs, dragging them on to the dancefloor to struggle with a gauntlet of hands and sweaty bodies. There used to be a well-known journalist in this space who was known collectively as ‘the ass grabber’. I, myself, have been cornered at a work dinner by a man who had had a bit too much to drink.

We’ve all been there. But this story, this particular party, haunted me.

What made this particular charity bash grab so many headlines was not the treatment of the various women who attending this party – but the way in which the women all ended up there.

The President’s Club, which had been going for over 30 years, was a charity fundraiser where businesses, some FTSE 100 companies, could buy tables and bid on various items – such as tea with the Governor of the Bank of England (something the B of E now says they never agreed to) or a night at a strip club.

The event was men-only.

The women were hired.

The women were hired from a hostess company – around a 100 or so who matched the ‘tall, thin and pretty’ requirements. They were told to wear black underwear and sexy shoes, kitted out in identical revealing dresses and then paraded on stage in front of the men before joining their tables to help fetch drinks, and according to the FT article, ‘hold hands’ with several of the men in attendance.

All of this happened at a well-known London hotel. The men who attended were senior figures at various corporations, a member of parliament attended and a well-known mainstream comedian – David Walliams – entertained the crowd.

Some of the women who were hired as hostess, noted the FT, were excited that they had been offered jobs at the companies where several of the men worked. I don’t know, maybe these guys didn’t work at firms with HR departments? Maybe they worked at companies that sold ‘sexy shoes’ and needed staff that actually wore them? Or maybe they were incapable of reading CVs from women who were not wearing black underwear?

I would love to know the percentage of female leadership at any of the companies that attended this event. I am going to take a guess and say it is probably pretty low.

100 years after women got the right to vote in the United Kingdom.

Almost 40 years after the election of the first female Prime Minister in the UK.

Five years after Laura Bates started the Everyday Sexism Project, to record the stories of ordinary women as a rebuttal to all those who claim ‘but we are all equal’.

11 months after Susan Fowler published her blog about her ‘’…very, very strange year at Uber…” which lead to the ousting of Travis Kalanick as CEO.

Four months after Megan Twohey and Jodi Kantor unveiled months of investigative research in the New York Times showing how a culture of entitlement and power protected the sexual predator Hollywood producer Harvey Weinstein at the expense of several women in the entertainment industry.

One month after Time Magazine named ‘The Silence Breakers’ – women who started making noise and speaking out about sexual harassment and abuse – as Person of the Year.

The President’s Club held a party where women were hired, paraded in front of and used as sexual bait, for a group of rich and powerful men. The event was described as ‘politically incorrect’.

All of this happened in 2018, in a Western democracy and a free market economy. And there are still those who look at this event (the organisation has since been dissolved) who say:

‘Well, actually…nothing went on there that doesn’t happen at a rugby club dinner.’

‘Well, actually…isn’t it a shame that the charities are missing out?’

‘Well, actually…many of the women knew what the party was like and used it to their advantage.’ (note – the women hired for this party did not do anything wrong).

This was just one event – one incident. But what is happening, today in 2018, is not about one event. It is not about one incident. It never is and it never was. It is about an entire culture of entitlement and power that keeps one half of the world’s population in a subservient position. It stunts their ability to make money. It denies them access to networks and groups that could lead to promotion and advancement. It makes them complicit in a society that tells them they should accept the sexual abuse and harassment that happens, as shown by #MeToo, to women every day.

In our world, the FinTech world, it is not uncommon to find startups with all male teams, management and boards that are all men, panels at events (or even entire events) that are overwhelmingly male. When this is questioned, the response is:

I have sat and listened to dozens of stories from female startup founders who talk about meeting an investor for possible funding – only to be met with unwanted sexual attention. Or they get asked about their ‘fertility’ or dismissed outright as being too cautious or for developing a female-friendly product the investor doesn’t understand. According to Pitchbook, women only account for 2% of venture capital funding for their startups? The response is:

Friends pass around videos and pictures from LinkedIn and Twitter advertising a ‘Miss Blockchain’ beauty pageant or showing a young woman sitting on the lap of a much older man at an industry event – with the cries of ‘WTF?’ –  comforting ourselves with female solidarity.

‘Well, actually, this is just a bit of fun…’

‘Well, actually, I have never heard of #MeToo…’

Well, actually…I have had enough. And so have many others. So what do a band of opinionated FinTech influencers do when they have seen and heard ‘enough’? Well they have a podcast.

Please tune in on Feb. 20th at 5:00 pm as we present ‘Well, actually…’ – Navigating the future of our industry in the age of #MeToo – hosted by BrightTalk. I will be joined by the always awesome:

I will be asking: