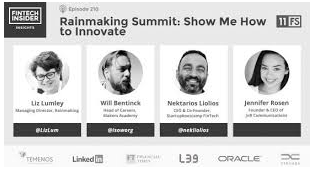 Liz Lumley, Managing Director of Thought Leadership at Rainmaking, says a woman approached her at one of their events recently and said, “I’m here because I get told all the time: You need to work with startups, and then no one tells me how.” The Rainmaking Summit was designed to give people like her the tools they need to make innovation happen. Straight talk. No bullshit. We sit down with key participants in London to get the lowdown.

“We need to move from ROI to R&D,” says Nektarios Liolios, CEO & Co-Founder, Startupbootcamp FinTech. “R&D implies failure. It implies experimentation, and just keep trying, keep trying until it works, right? Having been in the financial industry for nearly 20 years now, we don’t have that. There is no concept of building product, or doing anything, with an R&D mentality. Whereas any other industry has that.”

To learn more about the team behind FinTech Insider, visit us at 11fs.co.uk

The post Ep210 – Rainmaking Summit: Show Me How to Innovate appeared first on 11FS.